As many in Nosara know, the start of the 2015 real estate sales season saw relative weakness, especially after the Registro Nacional placed over 600 annotations on properties in the Nosara area between the months of March and May of 2015. This caused an expected but short-lived pause in real estate activity, as buyers needed to wait for more information and for the dust to settle, while sellers needed time to figure out if they had an exposure to the annotations and, similarly, what it all meant. As information became available, buyers came to realize that besides the 86 fincas and 90 planos with critical flaws (all of which are transposed properties and at the core of the widely known legal proceedings between S.A. de Custodia de Propiedades Guanacastecas and the National Land Registry and State of Costa Rica), the majority of properties with annotations, when analyzed on a case-by-case basis, do not have serious issues and can be purchased and sold, built on, used and enjoyed with confidence.

With the dust having settled, the real estate market picked up steam during the major sales season between December 2015 and April 2016. So, what were the major trends this year? Let’s take a look:

This was a very busy sales season for Nosara, and the trend seems to be continuing into the second half of 2016. Inventories are at record lows and prices continue to rise.  The best inventory still on the market seems to be homes in the mid-price ranges of $250,000-$750,000; there still are some deals on the market for homes in this price range. Click here to see Casa Verde, a 3 Bedroom Home on 1/4 Acre with Pool and walk to beach/shops and restaurants in Guiones North, for $575,000.

As the current sales season comes to an end, the biggest news to announce is the official lifting of annotations by the Registro Nacional on over 130 properties the vast majority of which are in the C section of Playa Pelada. The resolution issued by the Director of the Registro on May 2, 2016, based on informe DRI-CTE-04-0015-2016 issued on March 11, 2016, is the result of a technical study completed by the Registro on finca 47704, and on properties with annotations subdivided from 47704, to determine if the annotations should be lifted or continued.  As was previously reported by the Nosara Real Estate Report, the majority of annotations in Pelada exist solely because of a technicality that is seemingly irrelevant and without merit. With the recent removal of 130+ annotations, the Registry has taken its first step towards cleaning up the mess created when the annotations were issued, thereby providing a higher level of confidence in the land registry system and renewed good faith in this public institution. 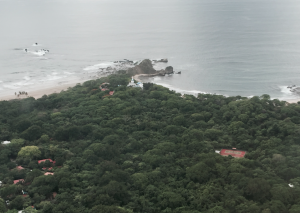 One of the areas in conflict, double titled property on the Guiones/Pelada border.

How did these annotations come to be removed? Although there are now a number or law offices requesting legal fees in order to attempt to lift annotations, the order to remove the annotations was issued by the Director of the Registro, as a result of further review of the Ampliación Informe Expediente 2010-336-RIM published in November 2014 (RIM-CCT-CT-62-2014).  Annotations in the C section were removed only on properties deemed to have no material defects because they presented no problems with overlaps, double titles, or transpositions.  Annotations on properties in the C section that overlap with the ZMT (Maritime Zone) were not removed, and a few new annotations for properties overlapping the ZMT just were issued.

What are next steps? We cannot say for sure, but it appears that the Registry will start to go section by section in the Nosara area to remove annotations from properties that should not have annotations and start to provide some property owners with clean titles and legal certainty.  In the case of the 86 fincas and 90 planos transposed within the mother property of S.A de Custodia de Propiedades Guanacastecas, there are a number of legal proceedings underway that likely will determine any resolution, which are independent from the recent study of finca 47704 described above.

It appears the Registro will continue looking independently at each section and property on a case by case basis, to determine which of the remaining annotations should be removed.  We urge caution for property owners who are paying legal fees for services to remove annotations, as many have tried and been rejected by the Registro while it completes its own independent studies of the Nosara situation.

The removal of the annotations is a small consolation to those who still may have big concerns about their property; but in the larger scale and big picture, it is a welcome step in a process that has been so confusing and frustrating to many land owners in Nosara. Only time will tell how things ultimately will play out as the National Registry moves forward, but this certainly is very positive news.